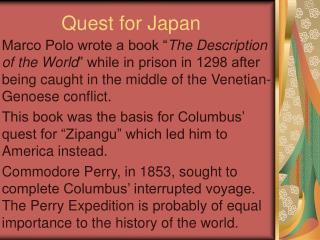 Quest for Japan. Marco Polo wrote a book “ The Description of the World ” while in prison in 1298 after being caught in the middle of the Venetian-Genoese conflict. This book was the basis for Columbus’ quest for “Zipangu” which led him to America instead.

QUEST-RA 2. National Data Bank for the rheumatic diseases 3. RAPID Scores - Other databases in the united states.

Quest to Photograph Sunrise behind Sri Pada - . attempts since returning to lanka 27 years since i saw it in 1978

Ruby Quest: Chapters 30-31 - . filbert emerges from the large tube, wielding a bonesaw. he demands that ruby and tom,

Ruby Quest: Chapter 28 - . the light fades from the room and darkness envelops ruby and tom. it is a familiar and

QUEST-RA 2. National Data Bank for the rheumatic diseases 3. RAPID Scores - Other databases in the united states .

Holocaust - Diary of Anne Frank Web Quest - . through the use of the resources in this web quest, you have the