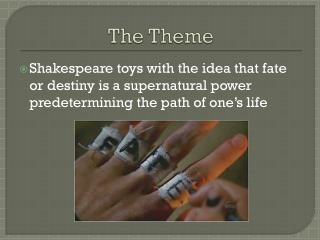 The Theme. Shakespeare toys with the idea that fate or destiny is a supernatural power predetermining the path of one’s life. FATE. The Theme - Save the world. the theme. the aims. to present and practice the vocabulary on the topic to practice speaking

THE OVERRIDING THEME - . define q ( m ) as a counterfactual expression determine conditions for the reduction if