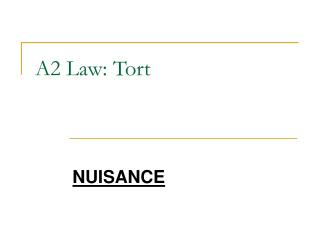 A2 Law: Tort. NUISANCE. PRIVATE NUISANCE. DEFINITION Private nuisance is a continuous, unlawful and indirect interference with the use or enjoyment of land, or of some right over or in connection with it.

House Rules Every Landlord Should Explain to Tenants - In this presentation, the pines apartment homes discuss on house

CRIMINAL LAW: The Nature of Crime - . criminal law. criminal law exists to control or penalize acts that are considered

Criminal Law - . a2 mrs howe. objectives. understand what makes an offence criminal the role of criminal law in society

Criminal Law - . what is a guilty state of mind? this is when you commit an act intentionally, knowingly, or willfully

Criminal Law - . chapter 5. objectives. distinguish between violations of civil and criminal law, and between felonies

Business Law I Negligence and Strict Liability - . negligence “the unintentional tort”. duty of due care -- there

Criminal Law - . chapter 2. vocabulary. crime – is an act against the public good, punishable by fine, imprisonment, or

Chapter 6 - The tort of negligence. chapter 6. chapter overview. this chapter looks at the concepts of defining tort