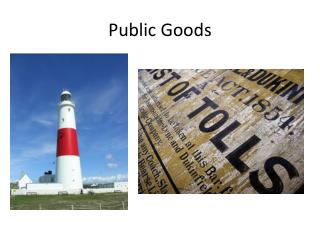 Public Goods. What are public goods?. Pure public goods are ones that when consumed by one person can be consumed in equal amounts by the remainder of society, and where the possibility of excluding others from consumption is impossible. Examples of public goods are: national defence ;

Public Goods - . public goods characteristics. goods with benefits that cannot be withheld from those who do not pay and

PUBLIC GOODS AND COMMON RESOURCES - . chapter 11. “the best things in life are free. . .”. most goods in our economy

Private vs Public Goods - . what difference does it make? would you like government to provide you free college? what

PRIVATE GOODS AND PUBLIC GOODS - . what’s the difference between installing a new bathroom in a house and building a

Market Failure: Public Goods - . starter: recap. define a merit good define a demerit good what is the link between these

Chapter 4: public goods - . public provision of goods. private provision of certain goods (particularly those that are

Government and the Provision of Public Goods - . public goods. goods that are normally provided by governments goods that

Public Goods - . are goods with benefits that cannot be withheld from those who do not pay and are shared by large groups