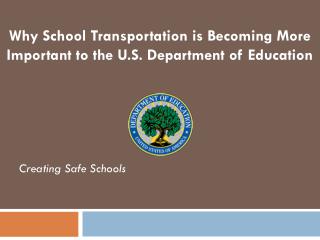 Why School Transportation is Becoming More Important to the U.S. Department of Education. Creating Safe Schools. “Produce a higher percentage of college graduates than any other country in the world by the end of the next decade.”. A Nonpartisan Agenda. Robot Cars and where they can take us - Brad templeton chicken, chicken (&amp; foresight institute) ‏

Creating a High-Performance Learning Culture A Training Workshop for School Leaders - . welcome!. purpose of module. to

INTRODUCTION: DO WE TRULY WANT BETTER SCHOOLS? - The opportunity: from “brutal facts” to the best schools we’ve

Creating an RTC Hot Fix - . september 18, 2013. steps for creating a hot fix. find the work item where the defect is

PRESENTATION GUIDELINES - Safe care and safe practice a safe nurse: a safe patient: a safe workplace, a safe profession a

Creating a Safety Culture - How does one create a “safety culture” in the laboratory? start by making safe science as

Rosenwald Schools - . the advancement of black schools in the south (1917 – 1932). background information. in the