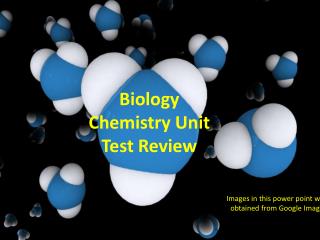 Unit 2: Chemistry Test Review - . what is the nucleus of an atom made of?. protons and neutrons . what are the negatively

AP Biology Unit Test Review Game - . read the statement/phrase below, and match it to the most correct answer from the

Chemistry Test Review - . your test will be:. 10 short answer questions each question is worth 10 points each partial

Ap Biology chemistry review - . 1. how do you know this is an organic molecule? 2. which letter in the enzyme catalysys

Unit test Review - . be prepared to demonstrate knowledge about: -use of archetypes in novel -how characters develop

Unit 2: Biology (Chemistry Concepts) - . objectives: i can … identify common elements or compounds by their symbols

Chemistry II Test Review - . 1). what are the five “evidences of a chemical reaction? give an example of each. color

CHEMISTRY 1 TEST REVIEW - . 1. label the parts of the atom below. electron. nucleus. proton. neutron. 2. all matter