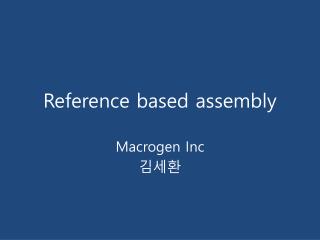 Schedule change - . galaxy server going down for maintenance on thursday. day 2: am - introduction to rna-seq (and a

The Human Reference Assembly - . how the sequence is made. deanna m. church staff scientist, ncbi. short course in

Cufflinks - . matt paisner , hua he, steve smith and brian lovett. the vision. rnaseq can be used for transcript