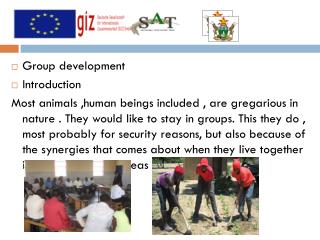 Group development Introduction Most animals ,human beings included , are gregarious in nature . They would like to stay in groups. This they do , most probably for security reasons, but also because of the synergies that comes about when they live together ie sharing of food, ideas and problems. Group Development - . functional farmer groups as a vehicle for effective extension to achieve household and community

Unitex Group Introduction - . by unitex. about unitex. unitex group was established in hong kong in 1997,and is a well

IRP Group Introduction - . 20 years of successful activity on the russian service market. we keep your expectations.

IBD Development Group - . huntington school 2008. progress to date. background to the bid – why the ibd? huntington