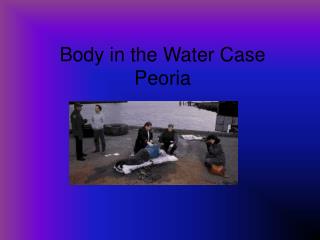 Body in the Water Case Peoria Body in the Water Case Peoria. The CASE. On Monday, November 7, 1999, at 3:30 pm, the body of a young male was found on the western shore of the Chippataugh Lake in Peoria.

Body in the Water Case Peoria he burden and order of proof in WTO claims: evolving Issues by Zeina Ahmad and Bashar H. Malkawi - The world trade ARTHROGRAMS RT 255 - . radiography of a joint space or it’s surrounding structures with injection of contrast media.

Is TVI illegal &amp; a scam? - . common issues. no product. truth. more as deals are availed. value for money

Bee Stings! - . coping with bee stings normal and allergic reactions. if you work with bees,…. there is one certainty