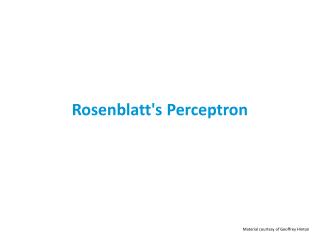 Rosenblatt's Perceptron. Material courtesy of Geoffrey Hinton . The history of perceptrons. Invented by the psychologist Frank Rosenblatt in 1958. The first successful algorithm for training neurons.

Machine Learning - . artificial neural networks. the brain. how do brains work? how do human brains differ from that of

Cognitive Computing 2012 - . the computer and the mind 4. connectionism professor mark bishop. the representational

Multi-Layer Perceptron (MLP) - . x 1. x n. today we will introduce the mlp and the backpropagation algorithm which is