The Conquista of the Aztec and Inca - PowerPoint PPT Presentation 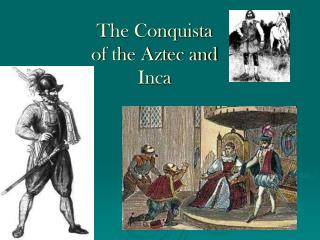 The Conquista of the Aztec and Inca The Conquista of the Aztec and Inca

Inca Social Structure - . inca development. the beginning of the inca rule started with the conquest of the chimu culture

Expanding the Empire - . expanding through trade. their long trek to find their sacred homeland left the aztec people

Ancient Cultures of Central and South America: The Maya, Aztec, and Inca - . mayan map. the mayans. traced back to 1500

Mesoamerica, the Aztecs, and the Spanish Conquest - . mesoamerica. a civilization because it meets the definition.

Aztec Daily Life - . world history honors. imagine you are a member of neighboring civilization in 1500 who has spent a

The Conquest of the Incas - . francisco pizarro. he was an illiterate, impoverished soldier, of who little is known.