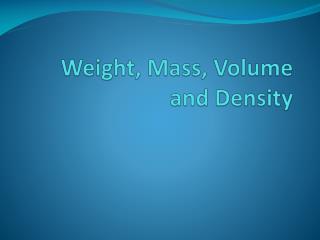 Weight, Mass, Volume and Density. What is Weight?. Weight is a measure of the force of gravity on an object On Earth, all objects are attracted towards the center of the planet by the force of Earth’s gravity

Section 7.1 The Mole: A Measurement of Matter - . objectives: describe how avogadro’s number is related to a mole of

Have neutrinos to do with Dark Energy ? - . why neutrinos may play a role. mass scales : dark energy density : ρ ~ (

Catalyst 1/31/12 - . have your midterm review packet out. i’m going around to check that you’ve done it. on your

Can eating fruits and vegetables help people to manage their weight? - There are many proposed strategies for losing or