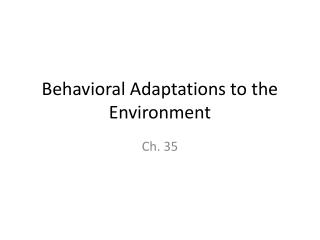 Behavioral Adaptations to the Environment Behavioral Adaptations to the Environment. Ch. 35. Goals. Define and distinguish between the proximate and ultimate causes of behavior. Describe the adaptive advantage of innate behaviors. Describe the respective roles of genetics and the environment in shaping behavior.

Behavioral Adaptations to the Environment

Documentation Training - . the current environment. why us and why now ?. medicaid has become a primary funding source

Data Collection - . the boring but have to get through stuff……. first…. a basic understanding of positive

How to write: measurable behavioral objectives (MBO s ) - . basic information on the essential elements of a measurable

Animal Adaptations - . what is ecology?. the study of the interactions that take place among organisms and their