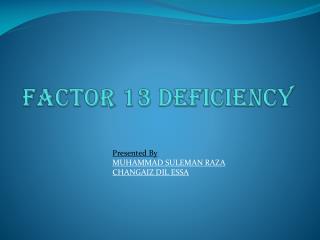 Factor 13 Deficiency. Presented By MUHAMMAD SULEMAN RAZA CHANGAIZ DIL ESSA. ● Factor XIII deficiency is a congenital disorder that is inherited as an autosomal recessive trait and is associated with a variable bleeding tendency SERIOUS DEFICIENCY - . sfsp fy 05. serious deficiency. denial of applications and termination - sa shall not enter into

Estrogens Deficiency - Estrogen is one of the most needed hormones in the female body. this article gives you all the