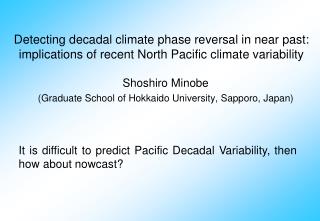 Detecting decadal climate phase reversal in near past: implications of recent North Pacific climate variability. Shoshiro Minobe (Graduate School of Hokkaido University, Sapporo, Japan). It is difficult to predict Pacific Decadal Variability, then how about nowcast ? . Mechanisms of PDV. GETTING TO KNOW THE PROCESS AND PROCEDURES FOR POST GRADUATE PROGRAMMES - . selamat datang welcome 欢迎光临 karibu

Iron and Steel Industry in Viet Nam: A New Phase and Policy Shift - . nozomu kawabata graduate school of economics and

Osteosarcoma - Development of hla-a2- and hla-a24-restricted peptide vaccines from a novel osteosarcoma antigen,