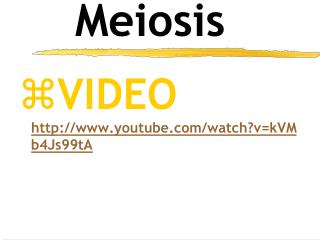 MEIOSIS - . chapter 9. why must organisms reproduce?. a. types of reproduction 1. asexual reproduction involves only

MEIOSIS - . http://waynesword.palomar.edu/lmexer2a.htm. remember from chapter 1: characteristics of living things all

MEIOSIS - . chapter 10. why must organisms reproduce?. a. types of reproduction 1. asexual reproduction involves only 1

Meiosis - . unit 3 part ii – the cell. what is meiosis. a form of cell division happening in sexually reproducing

Meiosis - . past paper questions. 1. define the terms gene and allele and explain how they differ. 4 marks sl. 1. define

MEIOSIS - . reduction-division genetic recombination. why do we need meiosis?. it is the fundamental basis of sexual

Meiosis - . honors biology spring 2013. warm-up. with a neighbor, discuss the following: what is meiosis? how does it

Meiosis - . diploid to haploid. crossing over. synapsis - homologous pairs line up = tetrad during synapsis the

Meiosis - . 10/29/09. what can you tell me about mitosis?. let’s review!. interphase prophase metaphase anaphase

MEIOSIS - . reduction-division genetic recombination. meiosis. the form of cell division by which gametes , with half the