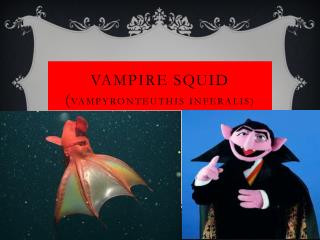 Vampire Squid ( Vampyro n teuthis Inferalis ). Vampire Squid From Hell. Vampire squid are named for their blue eyes, reddish brown skin, and webbing between their arms that looks like a cape. It is a small creature, growing to only about six inches in length .

Running Squid in freeBSD - . what is squid ? a full-featured web proxy cache designed to run on unix systems free,

Tell me about their new “discovery” – why does your character believe he or she is a vampire? - Write a funny story

Vampire Bats By C ameron - . what do they l ook l ike?. - pointy teeth - big eyes -the vampire bat has a short muzzle.

Squid Reproduction + Cool Facts - . 9b. giant squid. not much is known about them other than they have the biggest

The Vampire Myth - . lenny alcid &amp; jolo san diego. what is a vampire?. the personality of vampires. the

Vampire Bat - A vampire bat has fangs which is how it sucks the blood of mammals and birds . it also looks like a pig and

Holes - . by alayshah mabson . squid. squid is another boy at the camp. he is as tough as x-ray, although he often

Buffy the Vampire Slayer - . vampires, demons, and other evil folk - the theme of redemption in buffy the vampire slayer.

Vampire Bat - . michael. have you seen a vampire bat? if you have don’t run because your safe. read on to find out