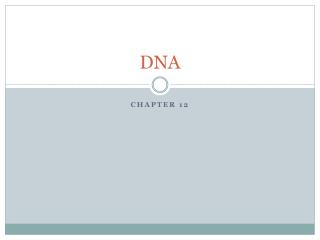 DNA. Chapter 12. DNA: The Genetic Material. The Secret of Life. Think Back…. Gregor Mendel and inheritance… Factors that determine traits are passed down from generation to generation, they come from both mom and dad But where did this information come from, and where was it stored?