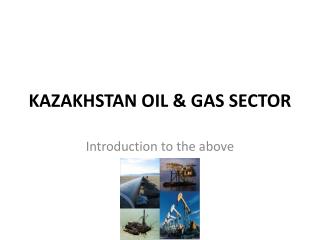 KAZAKHSTAN OIL & GAS SECTOR. Introduction to the above. Introduction. Kazakhstan has made significant economic progress in the relatively short time since independence from the Soviet Union. Maximo Oil Gas - Summary. maximo is a best of breed eam applicationaddresses all strategic asset classes from an

Update on the Oil &amp; Gas Sector - . with highlights on logistics services. contents. 1. current status of the oil

NATURAL GAS SECTOR - . a brief summary of the industry the overall structure of the market conduct of the firms in the

Gas and oil - . gas and oil and problematic. strategic resource ? the purpose in geopolitics is to understand if

Economic Impact of Oil and Gas Sector in BC - . david molinski assistant deputy minister oil and gas division ministry of

Oil and Gas - . describe and explain the origin of oil and natural gas and migration from source-rock to reservoir-rock