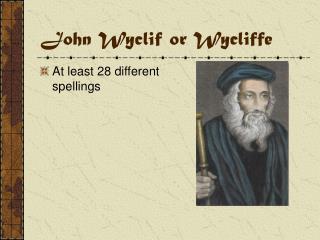 John Wycliffe - . the morningstar of the reformation. born in 1328 received theology doctorate from oxford began

John Wycliffe - . pre - wycliffe bible the english language traces back to ad 600. around 100 years later both the psalms

John Wycliffe - . by reggie andrews. john wycliffe lived almost 200 years before the reformation, but his beliefs and

John Wycliffe 1330-1384 - . insuperable love is a love for jesus that surpasses all other loves and endures through any

Wyclif and Hus - . early reformers. recap. the babylonian captivity at avignon and the great schism of the papacy

THE WYCLIFFE BIBLE - . name now given to a group of bible translations into middle english that were made under the

John Brown : Hero or Villain? - . why were sectional differences developing in the united states? economic conditions,

John Brown: Sinner or Saint? - . what do the following images reveal about slavery?. john brown. &quot;ghost of the

Technology or perish- John R. Pierce - Technology... is a queer thing.  it brings you great gifts with one hand, and it

Faithless or Faithful? John 20:24-29 - . doubting thomas? the witness of the other disciples behold my hands! “my lord

John Brown Highly principled businessman or deranged lunatic ? - . «  from this time, i consecrate my life to the