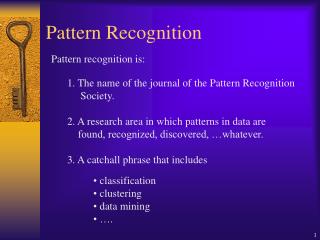 Pattern Recognition. Pattern recognition is:. 1. The name of the journal of the Pattern Recognition Society. 2. A research area in which patterns in data are found, recognized, discovered, …whatever. 3. A catchall phrase that includes. classification clustering data mining

What Is Frequent Pattern Analysis? - . frequent pattern : a pattern (a set of items, subsequences, substructures, etc.)