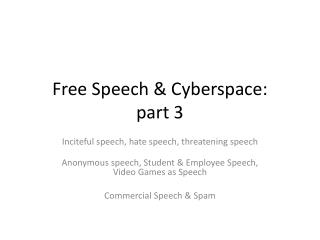 Free Speech - . by: awesome people. origins of free speech. free speech was originally conceptualized at the beginning of

Part of Speech - . definition. examples. identified part of speech in sentences the only thing we have to fear is fear

Cyberspace - . internet components. with this presentation we intend to present the