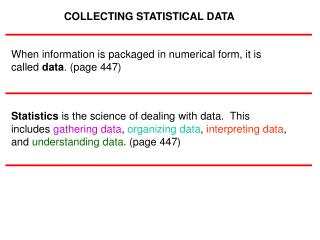 Producing Data - No matter how sophisticated the statistical techniques may be, reasonably accurate inferences about a

Data Mining: Concepts and Techniques — Chapter 2 — - . chapter 2: getting to know your data. data objects and

Chapter 4 - . gathering data. looking back. in chapters 2 &amp; 3 we learned how to describe data both graphically