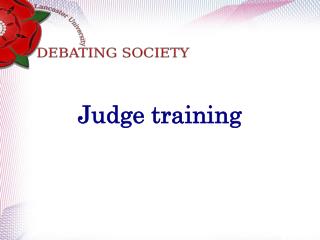 Judge training. What to look for when judging. Content Analysis Role-Fulfilment Structure and Timing Presence Style. Content. Relevant to the debate/motion. Engaging with the other speakers. To the point. Don't lie too much, or at least make it believable. Analysis.

You be the Judge! - Bpa texas. you be the judge!. teachers provide academics. students put in the work. judges provide

Sentence or Fragment, You be the judge - . by schimica j. gauldin. what i wanted to teach. poetry terms tone imagery

As you judge you will be judged - . a speck of sawdust and a lump of wood. how do you understand the lesson jesus is

Judges 17 - Now a man named micah from the hill country of ephraim 2 said to his mother, “the eleven hundred shekels