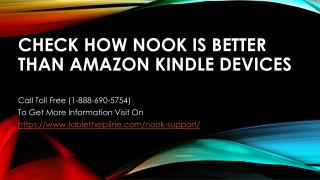 though full-fledged tablets have taken over the market, there is a niche for the love of reading which still has devices like Amazon Kindle. Among the monopoly created by this Amazon's device, Barnes and Noble also released one of their ebook readers which is known as the nook. Nook is a simple yet very competitive e-book reader and has a lot of features which are still shy from Amazon Kindle despite its various iterations and versions of the hardware. Now we will see how Amazon Kindle and nook fair competitively. OverDrive to e-reader - . as difficult as “one, two, three”. notes to self. share monitor 2 in presentation mode put

Talking to Amazon.com - . ken birman. talking to amazon.com. by now we understand some of the basics of talking to a big

How to get library eBooks on a Nook HD - . step-by-step guide. prepared by the computer lab montgomery county-norristown

Cohesive Devices - . explicit lesson. cohesive devices. are connectives connectives are words and phrases that set up