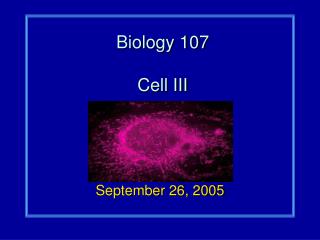 Biology 107 Cell III. September 26, 2005. Cell III. Student Objectives: As a result of this lecture and the assigned reading, you should understand the following:

1. Diffusion How most materials move in and out of cells - Cell transport * moving substances (such as food, water,

RIBOSOMES - . discovery of ribosomes. ribosomes first appeared under the electron microscope as dense granules. this

The History of Cell Biology - . the discovery of cells. all living things are made up of one or more cells a cell is the

8.2 Transport Across Cell Membranes - . terms…. selective transport : the movement of only certain substances across