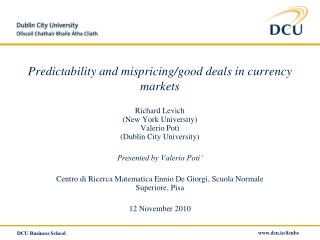 Development and Calibration of Ensemble Based Hazardous Weather Products at the Storm Prediction Center - . david bright

The covariation of windstorm frequency, intensity and loss over Europe with large-scale climate diagnostics - . a

Predictability and Chaos - . eps and probability forecasting. objectives of this session. appreciate that nwp is not the