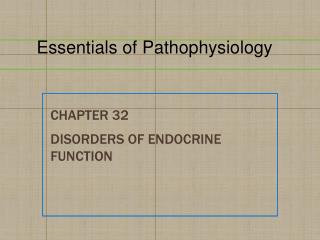 Essentials of Pathophysiology. Chapter 32 Disorders of Endocrine Function. Hypopituitarism is characterized by a decreased secretion of pituitary hormones. Hypothyroidism is evidenced by an increased metabolic rate, restlessness, irritability, tachycardia, diarrhea, and heat intolerance. Disorders of menstrual function. Neuroendocrine syndromes in gynecology - . by i. korda. the menstrual cycle is a cycle

Pituitary Gland Disorders - . pituitary gland. the pituitary is located at the base of the brain, in a small depression