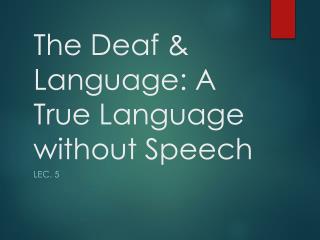 The Deaf & Language: A True Language without Speech The Deaf & Language: A True Language without Speech

Speech vs. Language - . how is speech produced? speaking in public preparing a speech creating &amp; conducting an

Understanding speech &amp; language development - . what you’ll learn. by the close of this course you will

Using Language in Public Speaking - . language is powerful. using language can be a challenge. word choices can make your

Communication Characteristics, Speech , Language and Literacy of the Hearing Impaired and Deaf - . influences on

Speech Acts &amp; Language Functions - . pragmatics not only language structure is rule governed – language use is,