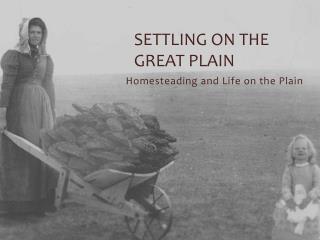 Settling on the Great Plain Settling on the Great Plain. Homesteading and Life on the Plain. Railroads Move West. 170 million acres, worth half a billion dollars, was given to railroad companies by the government between 1850 and 1871.

Settling on the Great Plain

Great Plains - . by… stephanie hinton, jasmine mai, michael pitts. location. the location is in the middle area of the

Plain English Style &amp; Applications - . what is “the plain english style”? what gave rise to it? use it to

Settling the west - . q 1 -evaluate the importance of mining in the west. growth of mining industry placer mining quartz

Settling the Great Basin - . chapter 7 utah studies. exploring the valley. on july 27 th , just a few days after the

PAPARAZZI A NECESSARY “EVIL” OR JUST PLAIN WRONG ? - . the big debate. there is great controversy whether the tactics

Settling and Floatation Part 2 - Flocculent settling (1) . particles settling in a water column may have affinity toward