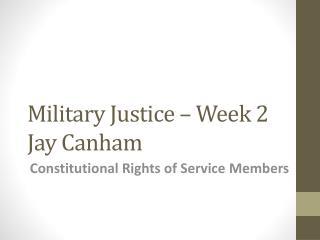 Week 23 - . please pick up the handout , a textbook , and take out lined paper word of the day= militarism use = ottoman

Chapter 1 Crime and Criminal Justice - . learning objectives. discuss the formation of the criminal justice system in

Justice - . justice. who is john rawls? what kind of book did he publish and when? how does he combine the unitarianism