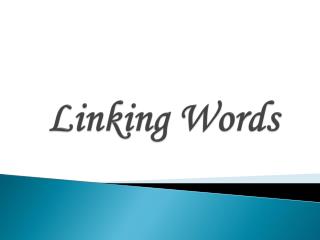 WORD SCRAMBLE - . while we’re all getting settled, let’s have a little fun! how many of these topic related words can

Tools and Interfaces for Wordnet construction, linking and maintenance - . abhishek g. nanda 03005031 under the guidance

Pronouns After Linking Verbs - . 6-4 p. 285. you have learned that a linking verb can join the subject of a sentence with

9. Linking and Sharing - . 9.1 single-copy sharing why share requirements for sharing linking and sharing 9.2 sharing in