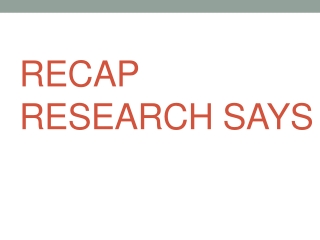 Pre-Activity: 1. Recap? 2. Research Says? - . activity (15 mins) based on the assignment: groupings: collate the

What the Research Says - . brought to you by your acteaz july 2014. cte outcomes. graduation rate drop out rate

What the Research Says Update - . brought to you by your acteaz february 3, 2012. recommended reading. education testing

RECAP - . what does the word disciple mean ? how is apostle different ?. watch the video again. write down the names of

Recap - . philia do you share the same truths as your friends? is it the right truth?. the most natural of the loves.