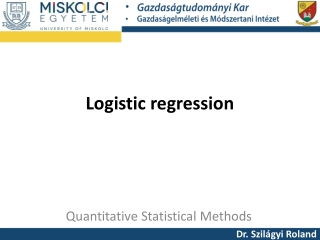 Logistic Regression using STATA - . in this stata lab session we will explore the following • how we invoke logistic

Logistic Regression Analysis - . gerrit rooks 30-03-10. this lecture. why do we have to know and sometimes use logistic

Discriminant Analysis - . da is used for discriminating among groups by analyzing data with a discrete or categorical

Multinomial Logistic Regression: A Problem in Personnel Classification - . in our first class on multinomial logistic