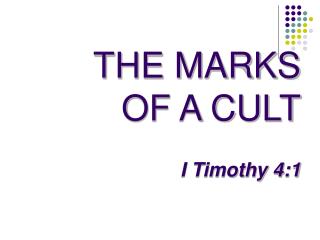 THE MARKS OF A CULT I Timothy 4:1. The Spirit clearly says that in later times some will abandon the faith and follow deceiving spirits and things taught by demons. I Timothy 4:1. Extrabiblical uthority All cults deny what God says in His Word as true. 1 Timothy 2 Model of Exegesis But is it a Model for Women in Ministry? - . hermeneutical problem. this passage is a model

Introduction to Human Physiology - . what is physiology? it is the science that deals with the function of organs and

Organisational Communication Com 202-5 ( Essential for exams) - . “out beyond ideas of wrong doing and right doing