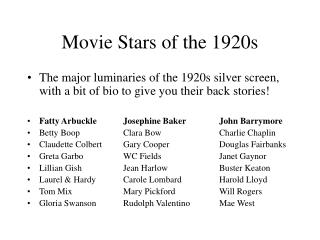 Movie Stars of the 1920s. The major luminaries of the 1920s silver screen, with a bit of bio to give you their back stories! Fatty Arbuckle Josephine Baker John Barrymore Betty Boop Clara Bow Charlie Chaplin Claudette Colbert Gary Cooper Douglas Fairbanks

The 1920s - . essential questions. why did the u.s. experience so much political and social change during the 1920s? why

Apollo 13 A Leadership Movie ULDP Lesson Plan - . notes to the instructor not a slide for the presentation. recommend all