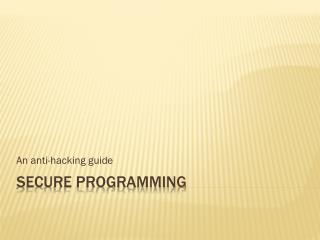 An anti-hacking guide. Secure programming . Hackers are kindred of expert programmers who believe in freedom and spirit of mutual help. They are not malicious. They may be tied to the common belief described aptly by the modern Zen poem stating:

Object Oriented Programming - . programmer thinks about and defines the attributes and behavior of objects. often the

Programming with Macros on the Haas CNC - 2. i. goals of this class. understand the differences between a macro and a

Software Security : Tonex Training - Software security training course introduces you to an assortment of themes in