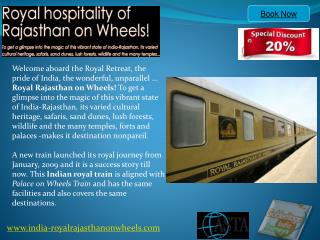 Welcome aboard the Royal Retreat, the pride of India, the wonderful, unparallel ... Royal Rajasthan on Wheels! To get a glimpse into the magic of this vibrant state of India-Rajasthan, its varied cultural heritage, safaris, sand dunes, lush forests, wildlife and the many temples, forts and palaces -makes it destination nonpareil./nA new train launched its royal journey from January, 2009 and it is a success story till now. This Indian royal train is aligned with Palace on Wheels Train and has the same facilities and also covers the same destinations.

Indian marble rajasthan - Royal white marmo pvt ltd was started in year 1995 at rajsamand, rajasthan with the aim of

Extensive Information about Rajasthan - The historical traditions of rajasthan are that rajputs, jats, nath, bhils,

Different Types of Wheels - There could be different types of wheels based on their style and quality. 5 out of them are

10 Things you should be doing in Rajasthan - Located in the north-west region of india, rajasthan is the biggest state of

Hotel Royal Empire - Situated within the prime locales of jaipur, and in close proximity to the international airport,

Hotel and Palaces in Rajasthan to Spend holiday - India is very beautiful country with its rustic charm, history and