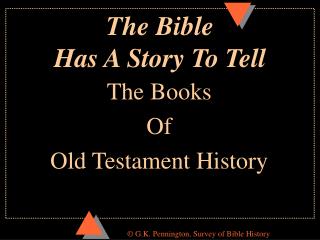 How Did We Get the Bible? - . how we got the bible. lesson three: the history of the english bible. am i a soldier of the

Baptist Distinctives - What it means to be a baptist. baptist distinctives. we believe the bible is the only authority

Balaam’s Tragic Story - . numbers 22 – 25. balaam’s tragic story: introduction. if i was asked for any proof that