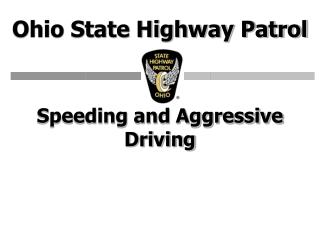 Ohio State Highway Patrol. Speeding and Aggressive Driving. Introduction. Speeding is a serious safety issue. Speed reduces the time drivers have to avoid crashes and it increases the likelihood of crashing and the severity of crashes that do occur. AVOID SPEEDING & AGGRESSIVE DRIVING - If you need a dallas car accident attorney, you can count on dottie hyde to

Aggressive Driving/Road Rage - . topic 6 lesson 1. most crashes are not accidents they are often the result of drivers

Aggressive Driving Road Rage - A 29-year-old man was shot to death, an apparent victim of road rage. according to

The Dangers of Speeding while Driving - Prepared by: http://revol.com.sg/ the faster you drive - the greater your risk of