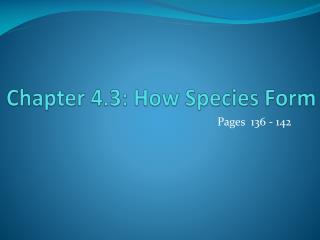 Chapter 4.3: How Species Form. Pages 136 - 142. What is a species?. Biological species consists of populations that can interbreed and produce a group of viable offspring , which can also reproduce in nature. They are reproductively isolated from other species.

Chapter 15: Biological Classification - . what is this?. these are some of the common names for this animal. scientists

The Origin of Species Chapter 22 - . the concept of species must account for two phenomena: the distinctiveness of

The Formation of Species - . how do new species of organisms arise?. what does “different species” mean?. species:

4.3 Succession - . how ecosystems recover from disturbances. primary &amp; secondary succession. what is ecological

SPECIES &amp; SPECIATION - . (a) in your own words define what is the species? (b) what is speciation?. species

What is a species? - These are members of different species - eastern (left) and western (right) meadowlark.