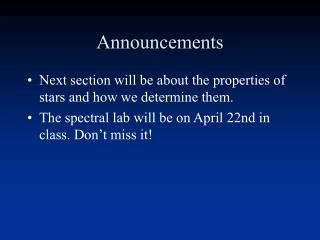 Announcements. Next section will be about the properties of stars and how we determine them. The spectral lab will be on April 22nd in class. Don’t miss it!. The Bigger Picture. We live on the outskirts of a pretty good-sized spiral galaxy composed of about 100 billion stars.