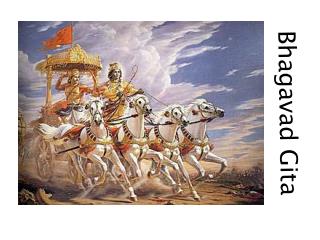 Bhagavad Gita. Chapter 1, Verse 1. This is a reference to the beginning of the Mahabharata War, on the battlefield of Kurukshetra. DHRITA-RASHTRA On the field of Truth, on the battle-field of life , what came to pass, Sanjaya, when my sons and their warriors faced those of my brother Pandu?.

Bhagavad-Gita As It Is Chapter 4 - . text 4-8 mystry of lord’s birth and activities. arjuna uväca aparaà bhavato

BHAGAVAD GITA AS IT IS CHAPTER 17 TEXT 7-10 - . nature of people according to different modes. text 7. āhāras tv api

Bhagavad-Gita - . chapter 1 – section 2 krishna brings arjuna in between both the armies. arjuna prepares to fight.

BHAGAVAD-GITA As It Is - . chapter 13 text 25-29 the atheists and the faithful process of hearing proper understanding of

Introduction to the Bhagavad Gita - . review of “ arjuna’s despair”. acknowledgements. these notes are based on

Introduction to the Bhagavad Gita - . review of “knowledge of self”. acknowledgements. these notes are based on purna

The Bhagavad Gita - . peripheral characters:. krishna. krishna: the main character. the name comes from an individual who