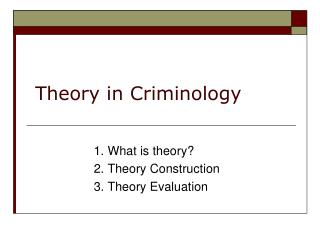 Theory in Criminology. 1. What is theory? 2. Theory Construction 3. Theory Evaluation . What is Theory?. Theory is a set on interconnected statements or propositions that explain how two or more events or factors are related to one another. Example.

CRIMINOLOGY &amp; THEORIES OF DEVIANCE - . deviance is a recognized violation of cultural norms. crime and

CRIMINOLOGY - . chapter 9. the relativist definition of crime and deviance the imposition of the deviant label the

Feminist Theories: Gender, Power, and Crime - . the rise of feminist criminology. for much of its history, criminology

Criminology - . what makes a criminal?. how does free will influence criminal behavior?. choice theories. choice