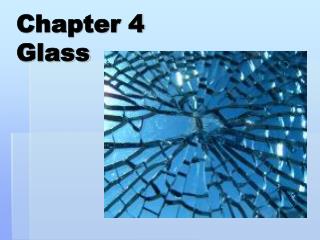 PROPERTIES OF MATTER AND THE ANALYSIS OF GLASS - . chapter 4. physical vs. chemical properties. the forensic scientist

Chapter 14 Glass - . “there is no den in the wide world to hide a rogue. commit a crime and the earth is made of

Chapter 3 &amp; 4: Glass Evidence - . what is glass?. glass is considered a very slow moving liquid glass is a hard,

Lesson 3 – Ceramics and Glass - . chapter 4 . ceramics. are hard, crystalline solids made by heating clay and other