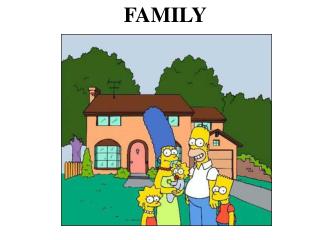 FAMILY - . a group of individuals living under one roof – household. a group of persons of common ancestry – clan. a

Importance of family life - . the family is the most basic and ancient of all institutions and it remains the fundamental

Family - . the nature of family. family- a group of people who are related by adoption, blood, or marriage, and are

The Family - . discussion outline. i. structure of the family ii. marriage and family in the u.s.: current trends.

THE FAMILY - . basic concepts on the family. burgess and locke (1960) defined the family