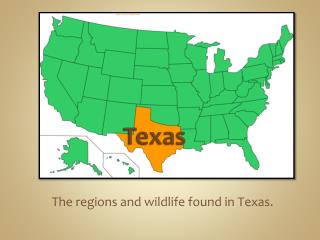 Texas. The regions and wildlife found in Texas. . Texas is filled with a wide variety of animals, insects, flora, reptiles and amphib-ians . . Texas is naturally divided into several sections. These areas are different habitats, or environments, where different things prefer to live. .

The Four Regions of Texas - . what are the common characteristics of the texas climates? what are some of the key

The Symbols of Texas - . the lone star state. texas is a big state with many important symbols. the alamo. one of our

Welcome to Texas - . ya’ll!. texas is the 2 nd largest state by population and area in the whole united states.

The Civil Rights Movement in Texas - . what are civil rights?. civil rights are the nonpolitical rights of a citizen the

An Introduction to Public Health Law in Texas - . anne kimbol university of houston health law and policy institute. what

Regions of Texas FOldable - . include the following: 1. all sub-regions 2. natural vegetation 3. natural resources 4.

The 7 Regions of Texas - . create a brochure describing the seven regions of texas. use the internet to research

Texas Independence and the Mexican Revolution - . tensions between mexico and the us. mexican government encouraged us