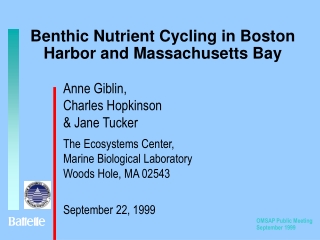 Nutrient Cycling - . 3.3. energy vs. matter. energy flows throughout an ecosystem in one direction from the sun to

Nutrient Cycling - . water cycle: repeated movement of water between the earth and the atmosphere water is essential to

Nutrient Cycling - . what happens to matter in an ecosytem?. questions for today:. how does matter cycle through an

Boston Harbor - . salutary neglect a. during the early years of settlement england largely ignored her colonies.

NUTRIENT CYCLING IN AGRICULTURE - Role of agri-environment group. research, advice and teaching on nutrient cycling in

Boston Massachusetts - . by: ellen casteen, kaleb dale and lester mejia. boston facts. boston is in the state of