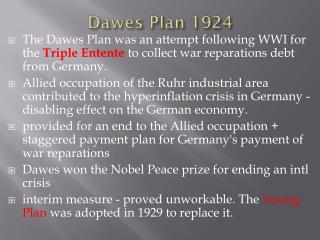 Dawes Plan 1924. The Dawes Plan was an attempt following WWI for the Triple Entente to collect war reparations debt from Germany. Allied occupation of the Ruhr industrial area contributed to the hyperinflation crisis in Germany - disabling effect on the German economy. What are we going to go over? - . why a plan enhancement is needed explain the new plan examples transition setting

Developing a Business Plan for your Agricultural Operation - . overview. objectives . what is a business plan?. what is a

Get TWO sheets of paper and fold in thirds to make nine squares - . get a book. chapter 8 vocabulary. long drive open

Instructions for Submitting Your School-wide PBIS Plan - . when submitting your sw pbis plan, please use the following in

Automate Your Business Plan - . a comprehensive business planning tool that provides solutions for business. how to

1926- Germany is allowed to join the league of nations - 1923- introduction of the rentenmark. match the heads to the

Consequences of the First World War for Germany - . germany 1918-1933. the situation. the kaiser has abdicated and left