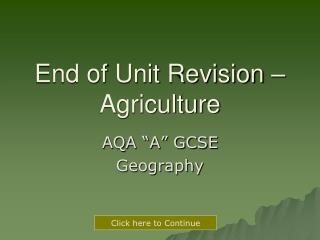 Unit 4 AoS 2 Revision - . dp 8 the means by which the commonwealth constitution protects rights, including structural

Unit 1 Income and Receipts Revision - . aims and objectives. revision of unit 1 prior learning preparation for skills

Unit 3 AoS 2 Revision - . dp 5: the role of the high court in interpreting the commonwealth

Revision for Unit Four - . 执教：容桂小学 张一韵. give the “ing” form of these verbs. write. shop.

Revision for Unit 1-4 - . part 1:. word study. 1.competition: speak out and spell the words according to the words and

REVISION UNIT 4: DEPRESSION - . what are the key areas of the specification?. 1. clinincal characterisitics 2. issues

Unit 5 - . grammar. unit 5. revision. could you tell us something about what we learned in the last period ?. unit 5.

Unit 1 Revision - . section a. how to respond…. immediately address the question

Unit 8 Revision Notes - . unit 8 revision notes. certain metals can be made magnetic, allowing them to be attracted to